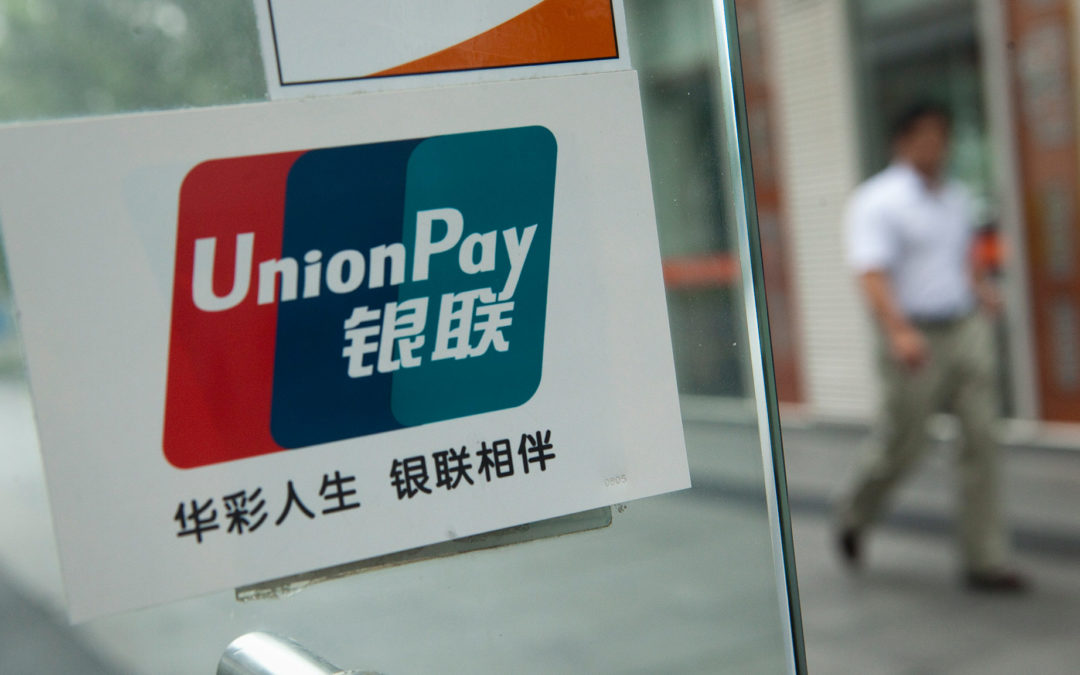 Union Pay is the state run credit and debit card system with the largest reach in China and overseas. Online, it is competing with AliPay and WeChat.

Union Pay is China’s state sponsored debit and credit card provider which has been enjoying complete market monopoly up until emergence of AliPay. It is still the most common payment method for offline transaction and its entry into online payment market is relatively recent.

In May 2017, UnionPay introduced its first QR code based payment method similar to the other two payment systems we have reviewed. It is, however, going to be an uphill battle against AliPay and WeChat Pay who already control about 90% of the market. Union Pay biggest advantage is its enormous user base – every Chinese with a bank account is already linked to Union Pay simply by virtue of being a customer of one of 165 participating banks. UnionPay has issued more than 5.4 billion cards and processed over 38 billion transactions within 2016 alone.

Although, Union Pay issues credit cards, it is better known as China’s primary debit card provider. It is always linked to user’s bank account and requires using the physical card to process transaction. Up until introduction of the previously mentioned QR payment systems and a mobile app, that was the only way to process a payment.

UnionPay is still the most commonly accepted payment method in China with nearly every business being the network’s member. Most government services also accept Union Pay.

Unfortunately, the reliance on magnetic strip and the security pin, makes Union Pay a less secure payment method. Chinese social media is full of horror stories of emptied accounts as a result of copied or stolen Union Pay cards. In contrast, AliPay and WeChat are much more secure, thanks to its encryption, dynamically generated QR codes and linkage to users’ smartphones.

Union Pay payment system supports all types of mobile devices and website integration. It can also be linked to Apple Pay which is currently the only way to link Chinese bank account to Apple’s payment system in China.

Transaction fees of UnionPay follow the same logic as credit card – the fee is charges to sellers (online or offline merchants) and there is no fee for buyers. The fees charged to merchants are combined of bank’s portion (0.7%) and UnionPay commission (0.1%).

Union Pay is, by far, the most commonly accepted Chinese payment method outside of China. Thanks to Union Pay linkage to the banks, most ATMs in Asia and, increasingly in North America and Europe, accept UnionPay withdrawals. Large number of business overseas, including most large department stores, also accept Union Pay.

Also, unlike AliPay and WeChat Pay, UnionPay can process nearly all world currencies.

Chinese tourism boom has been a blessing for UnionPay: in 2015, 2.5 million Chinese who traveled to US spent more than $40 billion during the duration of their stay. Vast majority of those transactions were processed by Union Pay.