In the first half of 2018, more than 85 percent of all Chinese ecommerce sales in retail trade were shared by ten major players on the market. Recently, the market witnessed the growth of several smaller e-commerce retailers such as Pinduoduo and Gome. However, Alibaba consistently occupies the highest place over the years, with a 58.2 percent share of all e-commerce retail sales in 2018.

Alibaba.com was originally launched in 1999 as a B2B e-commerce portal to connect Chinese manufacturers with foreign buyers. In 2003, the service expanded to C2C with the launch of the largest ecommerce marketplace Taobao and in 2008 a B2C online retail platform Tmall, which are the current market leaders in their respective business segments.

In the fiscal year ending March 31, 2018, the annual revenue of the Alibaba Group amounted to approximately 39.9 billion US dollars (an increase of 58 percent) with a net result of 9.79 billion US dollars. The annual revenue of the core commerce company rose by 60 percent to around 34.12 billion US dollars, the highest sales growth since the IPO. In 2018, Alibaba retail markets recorded 28 percent annual growth in total gross commercial value (GMV), driven by Tmall and its robust physical goods, GMV growth in clothing, FMCG, household appliances and consumer electronics categories. The following graph compiled by Statista illustrates the current state of Chinese ecommerce sales in 2018. 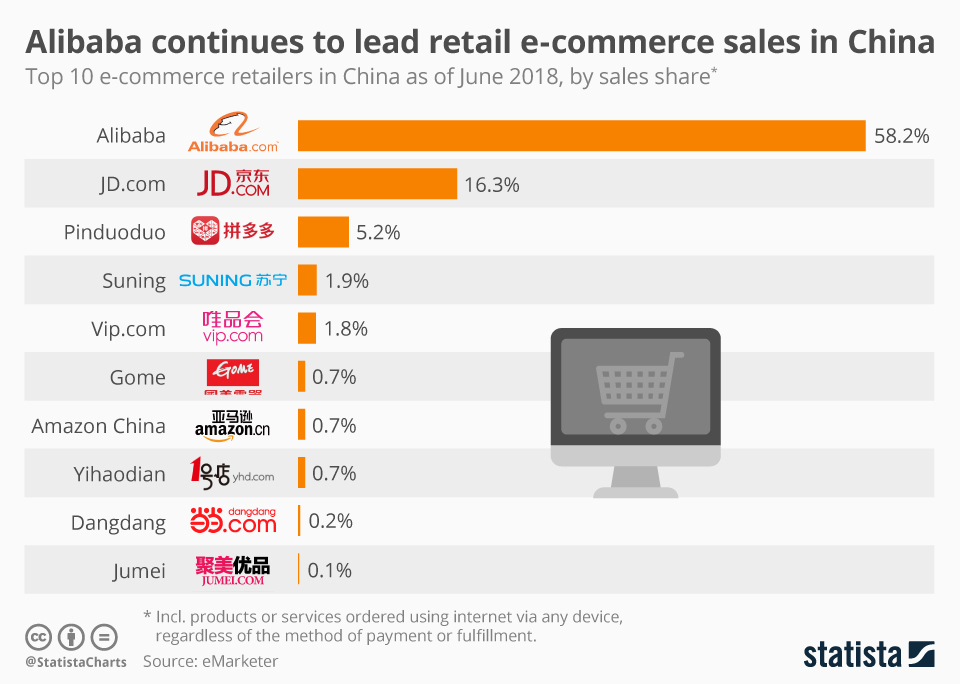