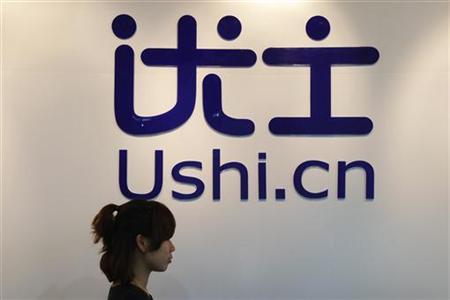 Traditionally, there haven’t been too many options for B2B marketers in China: Alibaba.com is not suitable for everyone and has a reputation of being associated with lower quaility products and services. Online and print magazines, as well as industry publications, have always been some of the most popular routes. In the last few years, thanks to explosion of social media in China, a new promising channel is emerging – online professional networks.  Unfortunately, the biggest network of this kind, LinkedIn, hasn’t really caught on in China and its market share remains negligible, at least for now. Most Chinese white collar professionals use other networks which I’ve reviewed in my my previous post.

One of the most popular sites is called “Ushi” (优士 yōushì) which means “outstanding professionals” in Chinese, with a double meaning of “competitive advantage”. The majority of Ushi’s 1 million plus members are concentrated in Tier 1 cities. While 1 million doesn’t sound like a lot in China, Ushi claims to attract higher quality users compared to other networks.

At the moment, in order to be able to advertise on Ushi, signing of a minimum 3 months contract is required. In general, Ushi’s advertising options are heavily geared toward recruitment: the ads can be linked back to a recruitment pages within Ushi where potential candidates can learn more about available opportunities and HR contact details.

Here is how a banner ad on Ushi would look like: Additionally, Ushi development team will create a customized Company Page for you within the Ushi.com site. This page will be searchable by standard search engines, and Ushi members will be able to “follow” the site to receive updates on new opportunities. Ushi website can be integrated into a broader social-media HR strategy if necessary. The company page would look like this: 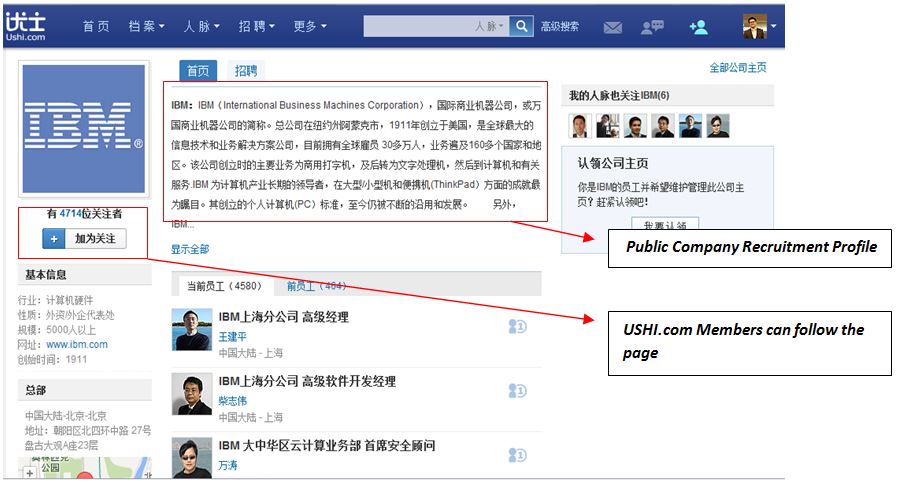 In case of advertising jobs, the “followed” companies will appear in the user’s  menu for easy access: 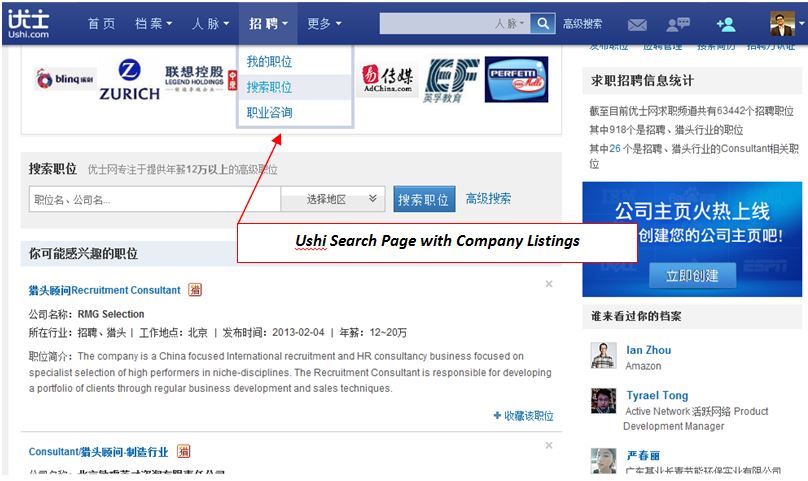 In addition, all Ushi members receive a weekly Newsletter from the network, which includes updates on activity within their profile. This will include a prominent advertisement for you within this newsletter: 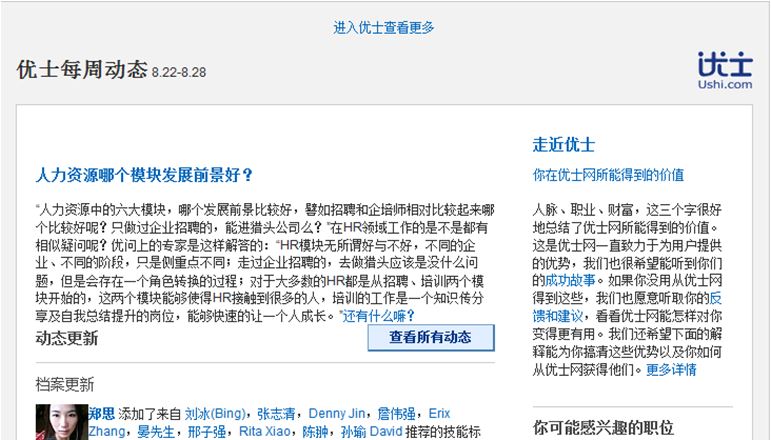 For brand advertising, Ushi would typically offer a customized campaign aimed at engagement. An example would be a recently completed campaign for Hilton Hotels. The purpose of the Hilton campaign was to drive high-value brand engagement with Ushi members by having them comment on a key discussion topics. To “qualify” as a successful “interaction” in this campaign, Ushi members needed to leave a substantial comment that was publicly-available to other members: 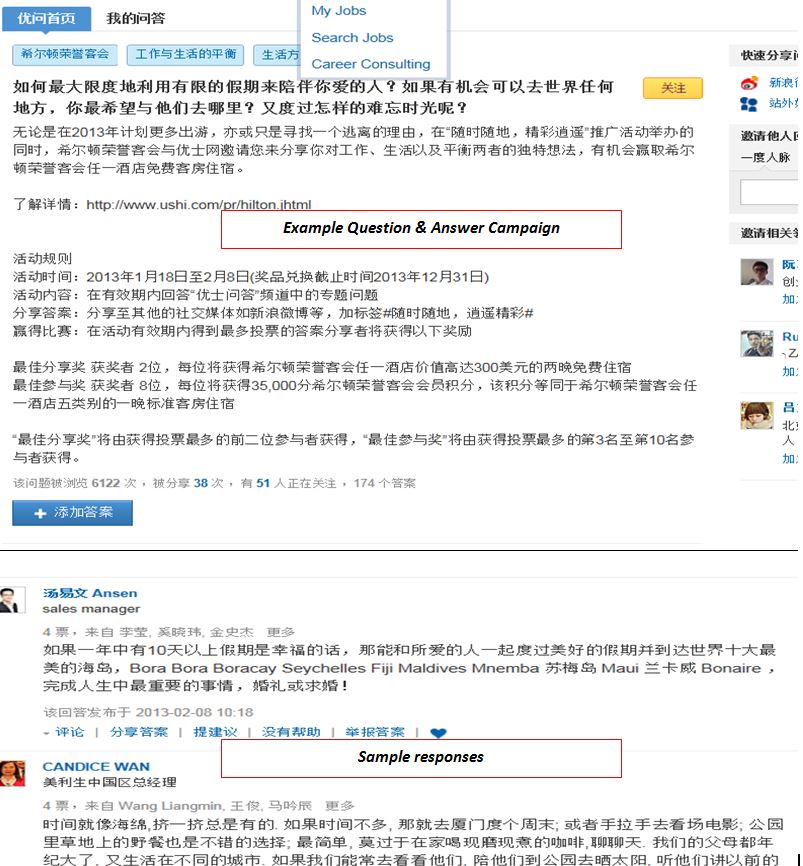 Another example of brand engagement campaign is the one for British Airways which was organized in a form of a quiz on British etiquette. The participants were quizzed on various UK related topics from golf and business to education and real estate. On a completion of the quiz, the participants would be able to enter a lucky draw : 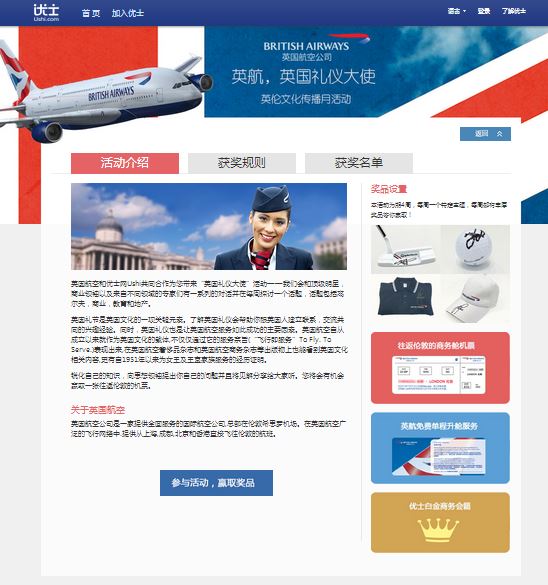 In conclusion, advertising on Ushi does not follow CPM or CPC based model but instead focuses on customization and engagement. While it’s a promising approach, it currently lacks flexibility and doesn’t take advantage of Ushi’s ability to learn about their users in order to target them more accurately. Also, a 3 month contract would cost approximately 100,000 RMB which isn’t exactly an affordable option for smaller budget advertisers.

Next I will review advertising on Tianji.com, the largest online professional network in China.