The Rise of Chinese Middle Class 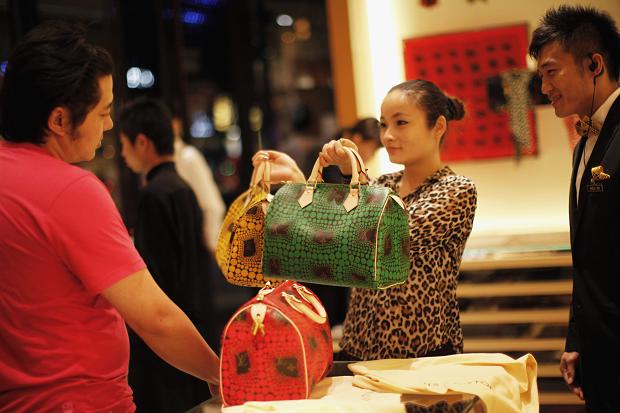 In light of the recent Chinese stock market fall, sudden devaluation of yuan, manufacturing slowdown and talks about troubled real estate market there are signs of growing concern for a long term prospects of Chinese economy. Some reports talk of upcoming economic crash and other doomed scenarios. I would argue that the long term prospect for Chinese economy still looks fairly bright which, if nothing else, could be entirely driven by the rise of Chinese middle class.

Obviously, no country can sustain a breakneck economic growth, like the one that China experienced for over two decades. Current figures indicate that the growth has dropped below 7% for the first time in many years, which is still a pretty impressive figure.

The strongest argument in favor of Chinese economy continuing to grow and develop is the enormous potential of local consumption. This, in turn, is driven by the rise of Chinese middle class that is becoming both larger and more sophisticated. This, of course, presents some unmatched opportunities for foreign companies to sell their products and services to the increasing pool of potential buyers.

Throughput the history, foreign traders were often frustrated with China because the majority was just too poor to afford Western products. This is no longer the case.

This chart from the Economist shows that the Chinese middle class is predicted to increase tenfold in 10 years from 2010 to 2020:

The Rise of Chinese Middle Class 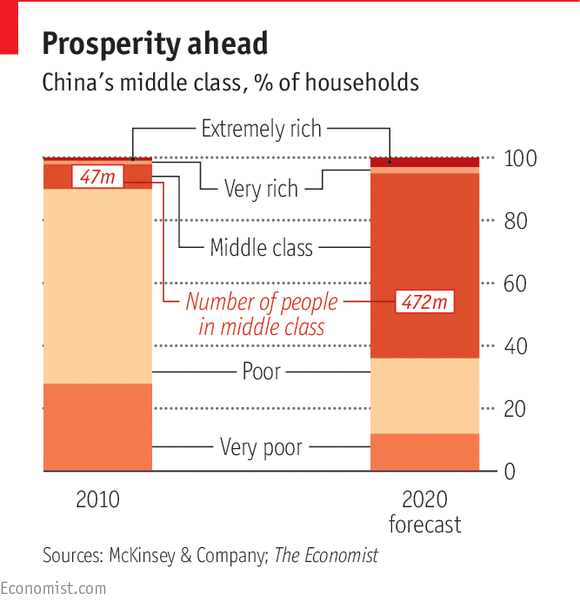 The middle class is defined here as a household with enough money to buy a car, a TV, a fridge and a smartphone. Smartphones, of course, have been selling like hot cakes in China – Apple reported 112% Q/Q growth for this year Q2: six of its ten busiest stores across the globe are in China. This is what Tim Cook, Apple’s boss, had to say about his view of Chinese market: “I continue to believe China represents an unprecedented opportunity over the long term.”

Chinese consumer is also becoming more sophisticated and discerning which leads to intensified competition. Investment in proper marketing in China is becoming increasingly important as it also differs quite a bit from what foreign companies could expect in their home markets.

Predictably, first tier cities and coastal provinces are the ones with most income, however, from the viewpoint of entrepreneurs, they are often considered as fairly saturated markets. EUI’s report argues that, based on the long term forecast of population growth and increase in disposable income, inland cities present more lucrative opportunities. Some less known cities within reasonable distance of the coast (for example Suqian and Xuzhou) could soon develop into attractive markets to target.

China’s ecommerce has been an important element in developing the consumer market and it will continue to play an increasingly important role. Chinese ecommerce market is now larger than that of American and is predicted to pass $1 trillion mark in 2019. Incidentally, online shopping makes it even easier for people living in lower tier cities to shop which further stimulates local economies.

Chinese consumer is also becoming more sophisticated and discerning which leads to intensified competition. Investment in proper marketing in China is becoming increasingly important as it also differs quite a bit from what foreign companies could expect in their home markets.

Marketing in Chinese social media has become a must for anyone trying to reach and connect with the Chinese. Considering the fact that main Western social media outlets are blocked in the Mainland, adapting to the local equivalent often becomes the stumbling block for outsiders.

Another change that is taking place in China now is the gradual shift from supplying goods to providing services. This can also be directly attributed to the rising Chinese middle class which demands better services in everything from healthcare to finance and entertainment.

Good quality services in China are often still behind accepted western standards presenting lucrative opportunities for energetic entrepreneurs. Recent explosion of various IT services is a testament to this growing trend. For example, e-learning is one of the hottest markets in China with companies raising hundreds of millions dollars in this space.

Often, a successful model from abroad would be copied and adapted to China. Such was the case of Didi Kuaidi, a mobile based taxi operator that shares a lot of similarities with Uber and Lyft.

There are even some extreme cases such as of Helijia, a firm valued at $300 million that provides pedicures in people’s homes…

In short, China has solid economic fundamentals to be able to continue attracting capital and talent for the foreseeable future. The growing Chinese middle class will be the primarily driver of the local consumption to much larger extend than the effects of external economic conditions.