Having 850+ million registered accounts, QQ still remains the most popular instant messaging app in China. It was first launched in 1999 by Tencent, the company behind WeChat, and it was initially much like an instant messaging pioneer ICQ, although packed with many more features. Today, QQ messenger offers much more than earlier versions: it has integrated emails, games, music streaming, dating service as well as integration with its social media outlet Qzone.

In fact, every QQ user is also a Qzone member making this platform the biggest in China by the number of subscribers. Unfortunately, despite being an enormous network, Tencent hasn’t been able to capitalize on QQ and Qzone marketing. The main sources of network’s revenue are games, sales of digital items and paid membership. Also, arguably, they are in the process of being cannibalized by WeChat, a more innovative service from Tencent.

For advertisers, QQ offers banner placement in the app as well as pop ups but those are quite expensive and, nowadays, largely considered ineffective. The social media outlet connected to QQ messenger, Qzone is divided into different functions. It includes homepage, status, blog, background music, albums, personal information, shared documents, friend visits, friend show, video show, and games. It also allows a high degree of profile customization and connectivity to 3rd party applications. Its overall profile design approach is more similar to MySpace rather than Facebook.

Qzone marketing basically come in 2 varieties: sponsored posts in the user feed and banner ads. After series of page redesigns over the past few years, banners now show up on either left or right side from the feed. 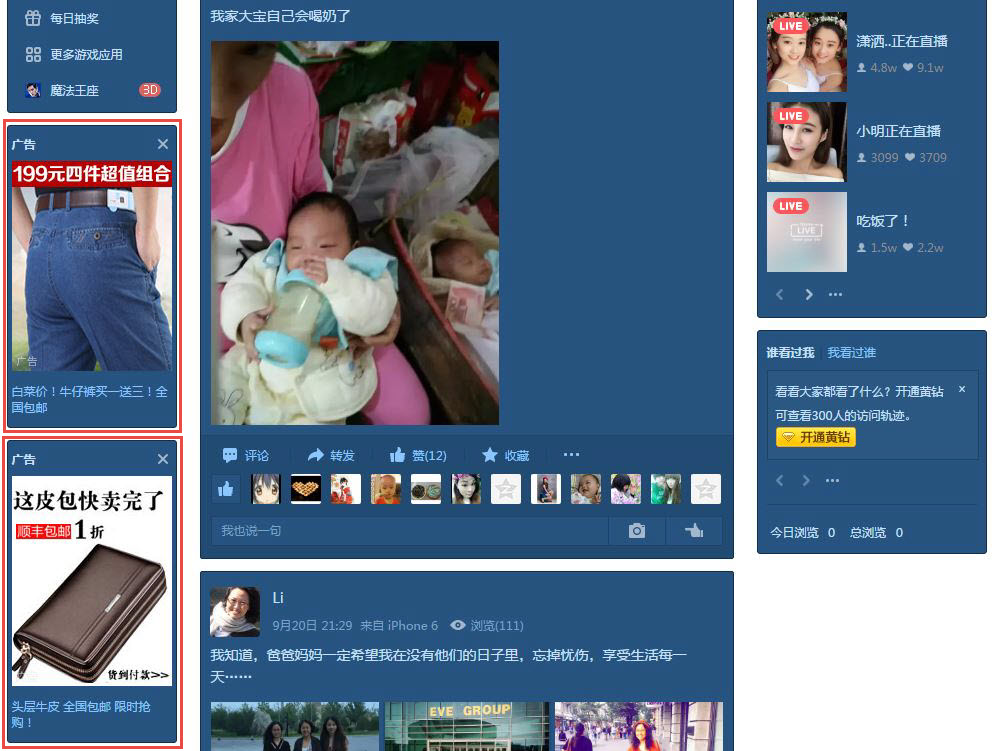 Currently, Qzone for mobile doesn’t show any ads and the stress is made on integrating it with QQ messenger while enhancing user experience by adding more options to the core messaging function.

Other methods of Qzone marketing include posting directly in the relevant group discussions as well as commenting. Obviously, this requires maintaining an active presence on the network and making sure that the profile is updated frequently. Luckily, some 3rd party solutions offer cross posting on a number of different platforms, unfortunately, except the most popular – WeChat. 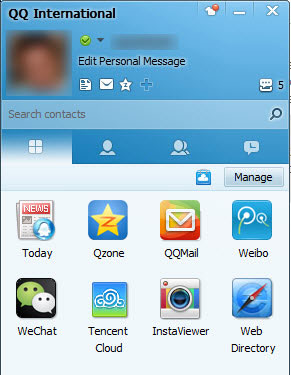 Since Qzone is mostly used by younger audience with limited spending potential it makes it less suitable for promoting large number of categories of products and services. Also, compared to other networks like Sina Weibo, it is more popular in 3rd and 4th tier cities. On the other hand, it still could be an effective route to reach a particular segment such as current or prospective students for example. Companies in educational space, foreign universities looking to attract new students, sellers of hot items popular with teenagers – all can find Qzone marketing an interesting channel to explore.

In the past, Qzone was the venue of choice for a number successful marketing campaigns like XiaoMi, a maker of popular cellphones, or Oreo cookies. Large number of celebrities still maintain active presence on the network, although it is unlikely to be their exclusive channel.

In addition, QQ messenger allows creation of groups (limited to 200 members for basic users and up to 1000 for VIP paid accounts) that can also be leveraged as an effective marketing channel. This feature allows for similar users can be grouped together and engaged all at once.