On Nov 12th, CNN has reported the record amount of internet sales in China that registered at $5.7 billion in just one day. This was nearly double last year’s total of $3.1 billion. The day, that came to be known as ‘Cyber Monday’, is actually Chinese singles day since it falls on Nov 11th, or 11-11. It is often referred to as Chinese Valentine’s day when people, not only singles, exchange gifts and go out.

The report mentions that “the sales on Tmall.com, China’s version of Amazon  run by Alibaba, reached $164 million in the first few minutes of the day”. This event represent the new milestone in an enormous shift of China’s consumers to ecommerce and away from the traditional brick and mortar stores. In fact, increasing number of younger Chinese are switching entirely towards online stores and rarely even visit traditional shops.

To meet this year’s expected spike, Alibaba said it has built or renovated more than 150 distribution centers, and prepped 20,000 computer servers to handle peak shopping traffic.

Rapidly growing ecommerce is now recognized as one of the future growth engines of China’s economy and enjoys solid government support as well. More people feel quite safe buying online, the instances of fraud are becoming rare and refund and return policies have largely adopted Western standards.

Ecommerce is also boosting supporting industries, such as logistics and transportation. CNN also mentions that in order “to meet this year’s expected spike, Alibaba said it has built or renovated more than 150 distribution centers, and prepped 20,000 computer servers to handle peak shopping traffic”.

Two trends are behind this explosive growth:

The graph below illustrates those exact trends: 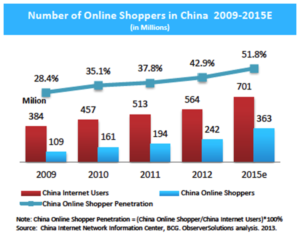