We often hear about cities in China in the context of a specific tier but what does it actually mean? What implications city’s tier would have on its population’s consumer behavior or availability of business opportunities?

First of all, even though the tier system has been designed by Chinese government it is still open to interpretation. Second of all, beyond 1st tier cities designation, there is much less consensus about which cities belong to 2nd, 3rd and 4th tiers.

Originally, the 1st tier category was much broader than it is today and included many cities that today are considered to belong to lower tires. Currently, only 4 cities make the 1st tier list: Shanghai, Beijing, Shenzhen and Guangzhou. Also, special administrative regions, Hong Kong and Macau, are not classified within the tier system at all.

2nd tier cities have become increasingly attractive to investors and represent some of the fastest growing areas.

There are typically 5 broad factors that determine whether a city belongs to the 2nd tier and those are:

1st tier cities represent the most developed areas of the country with the most affluent and sophisticated consumers. They are also considered to be the center of main economic activity. Industries that are evolved to become driving forces of Chinese economy tend to cluster around 1st tier cities as those locations have the biggest potential to attract foreign and domestic investments.

2nd tier cities have become increasingly attractive to investors as well and represent some of the fastest growing areas. The examples of 2nd tier would be cities like Tianjin, Chengdu, Suzhou,  Nanjing and Xi’an. Consumer behavior is evolving very fast in 2nd tier cities and, in general, tends to mimic 1st tier’s trends.

Overall, there are 24 cities that make this list with about 38 million households and $2 trillion income value.

With the estimated 75 million households and $3 trillion income value, 3rd tier cities are still regarded as the significant part of Chinese economy.

Often lumped together, cities in those categories represent the majority of China’s urban population and combined income. Currently, about 255 million households live in those cities with the estimated income of $7 trillion. The examples of 4th tier cities are Jilin, Yangzhou, Anshan and Luoyang.

Those are some of the 5th tier ones: Yan’an, Putian, Lijiang  and Nanping.

I find this illustration of all 5 tiers as a pyramid taken from Nielsen’s 2011 report “Winning in China” to be the most informative: 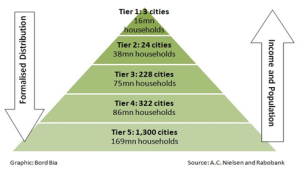