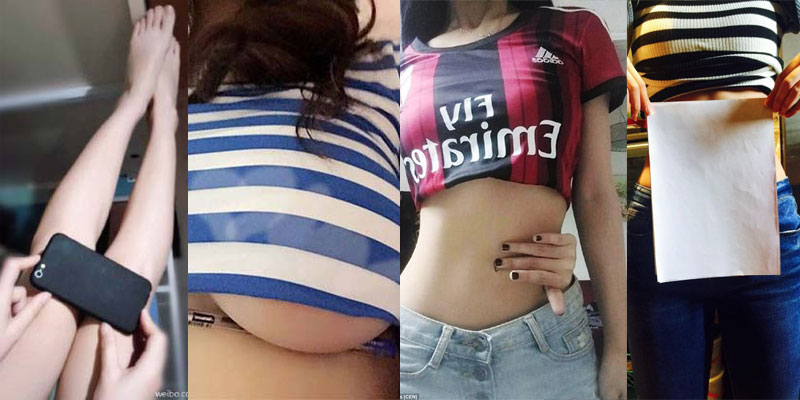 Last few of years have seen the rise of several bizarre body image challenges that went viral on Weibo, one of the most popular Chinese social media networks. Those Weibo trends attracted millions of views, likes and retweets as well as great deal of criticism and mockery. Let’s have a look at some of the most popular ones.

The contest participants have received quite a bit of support from other social media Chinese users and even from those outside of China. Critics, however, were quick to point out that shaving armpits doesn’t have much to do with feminism but a matter of personal hygiene. Others noted the fact is that shaving armpits for women didn’t become widespread in China until the 90s, one of many western trends that took root in Chinese society at the time.

Participants in this challenge were asked to reach their belly button from around the waist and post the picture of their success. It was mentioned 130 million times and spawned 104,000 active discussions threads on Weibo. Apparently, being able to do so demonstrated one’s skinny figure, the ideal to strive for.

As it later turned out, ability to accomplish this feat had nothing to do with fitness but more with the length and flexibility of one’s arms. The trend was also mercilessly mocked by people uploading their humorous take on the challenge. It also exposed more serious issues related to promoting eating disorder in never ending quest of already thin people to lose even more weight.

Weibo trend #3: coins on the collarbone

This new social media craze took over Weibo just after a week following the original belly button challenge. In order to demonstrate their skinny figures, young Chinese females were taking selfies with stacks of coins standing upright on their collarbones. Some people were able to balance as many as 20 coins on a collarbone.

A well-known Chinese actress, Lu Jiarong, was even able to fit 80 coins (40 on each side) while still managing to take a selfie. Although not as big as other trends, it still attracted over 30 million views and was followed by usual mockery with people balancing everyday objects, such as coffee mugs, eggs and cellphones on their shoulders.

This viral trend has started in Japan and quickly gained popularity among Weibo users in China. It was tweeted with hashtags #carrypenunderbreast or #UnderBoobChallenge which is pretty self-explanatory. Most troubling was the fact that it was often accompanied by caption “pass the challenge to prove you are a real woman”.

Perhaps not surprisingly, the challenge has seen its fair share of mockery too. Few overweight men took humorous selfies with stationary stuck under their “manboobs” while some fit male participants demonstrated their ability to hold pens between their sculpted pectorals.

This challenge that started in February this year required women to take selfies with a piece of A4 printer paper in front of their waists. Being able to completely hide one’s waist behind it was the proof of successfully meeting the test. The width of A4 paper is 8.3 inches which means that a woman waist had to be no bigger than 25 inches.

This trend quickly became as controversial as the previous Weibo trends and was criticized for promoting unhealthy lifestyles. Some women went on to take photos of themselves behind their diplomas to make the point on the superficial nature of this challenge while others covered their faces with A4 sheet.

The latest of the viral Weibo trends from last month was about being able to hide one’s knees behind iPhone 6 placed on top of kneecaps. This trend was all about promoting pencil-skinny legs – the latest standard of beauty in China. “iPhone6 legs” has already accumulated over 90 million views and 80,000 comments on Weibo.

Although the challenge was supposed to involve standard iPhone, it still isn’t clear whether using iPhone Plus models was considered “cheating”. Some even suggested the next challenge such as being able to completely hide one’s body behind iPad Pro… In China, anything is possible!