B2B vs. B2C Marketing in China 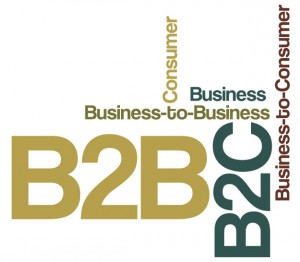 The differences and similarities between B2B (business to business) and B2C (business to consumers) marketing have been thoroughly and extensively discussed in the past. However, in the last few years, this topic became even more hotly debated in light of new social media tools available to marketers nowadays.

I’d like to take some time to examine some of those differences and similarities with the focus on B2B from the perspective of marketing in China.

The most often mentioned principal difference between B2C and B2B is the number of individual decision makers involved. In B2C case, it is most often just one person that you have to convince (sometimes two if you are selling your product/service to a household) while in B2B case it is most likely to be a group of decision makers. At least in theory, the final decision is made collectively by various department managers, engineers, executives and whoever else is on the approval list.

In China, B2B marketers often face a situation that, while a decision making process is still collective in theory, the final decision most likely to lie just with one individual. This person could be either a top executive or a business owner or, sometimes, a trusted employee or a subject matter expert.

Carefully preparing and presenting solid data backed by sound logic may be a great approach in the West but it may not work at all in China if the audience is not involved emotionally.

Of course, this situation could happen anywhere in the world, however, it is most likely to be encountered in China and, in fact, is very common with more traditionally run businesses regardless of the size.

What it means to a marketer is that the effort of reaching and winning this individual (provided he/she has been correctly identified) can be achieved with B2C methods.

Once again, things turn out to be slightly different in China. The concept of “saving face”, that is so important in Asian cultures throughout the entire region, is a purely emotional construct that has very little to do with rationality. In fact, I have heard much more often from my local sales  about the “feelings” of their buyers than about rational arguments that were put forward to make a sale.

At times, it was quite frustrating and I did ask myself on occasion: do they realize that it’s just a business and not a religion? Eventually, just like they say, you can’t change China, you just have to adapt. B2B marketing in China still involves high degree of emotional engagement that also makes it more adaptable to B2C methodology. Marketers that understand this concept and take advantage of it are those who prevail.

The last concept I’d like to mention is the selling process argument which states that the selling cycle is short in B2C vs. long and multilevel one in case of selling to businesses.

In China case, it mostly holds true but it is further complicated by higher degree of emotional involvement that marketers and sales people encounter at each step. Carefully preparing and presenting solid data backed by sound logic may be a great approach in the West but it may not work at all in China if the audience is not involved emotionally.

Building positive brand image in advance, finding ways to convey a strong and emotional message that speaks to the concepts of prestige and recognition so cherished by the Chinese, should all become critical engagement steps in your marketing efforts at all levels during the selling cycle.