4 Must Have Chinese Social Media Channels for Marketing to Consumers 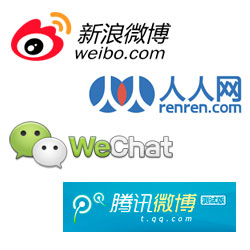 Every company who is serious about maximizing potential of social media in reaching Chinese consumers must take advantage of at least 4 most popular services. Those services are Sina Weibo, Tancent Weibo, Wechat and Renren. Of course, there are more social media sites in China with large subscription base and strong appeal and, depending on a specific product, they also can also serve as very effective channels. However, presence on the big four, at least as of the end of 2013 is essential for every brand.

Below is a quick run down of the big four.

By far the largest social media platform, Sina Weibo, claims user base of 22% of the entire China’s population.  It is owned by SINA Corporation and has been online since 2009. Often compared to Twitter, it currently has twice as many subscribers and is more flexible in terms of what type of media can be shared. Part of its appeal is the ability to share photos and videos, something that Twitter didn’t allow until very recently.

With Twitter being blocked in China, Weibo provided an alternative to individuals and companies looking to spread their message quickly and efficiently which is what micro-blogging is all about after all.

Weibo also implements strict censorship rules resulting in messages containing any blacklisted words being blocked automatically. Link shortening is also not allowed. Overall, as long as you stay out of politics (as you should), Sina Weibo is one of the most efficient marketing channels a brand can employ in China.

The alternative micro-blogging platform, Tancent Weibo, is similar to Sina Weibo in almost every way. It was initially launched by Tancent, the company behind QQ messenger, as a way to curb the competition. It still claims over 200 million subscribers and takes advantage of its huge user base with QQ and QZone.

Tancent Weibo is certainly the service to watch as its user base is well positioned to grow further. Many celebrities use this platform including Ma Huateng, Zhou Hongyi, and Liu Xiang Jet Li.

One of the fastest growing social media services, WeChat is designed exclusively for mobile users. WeChat app is available for every mobile platform that makes it the communication tool of choice of millions of users in Chinese speaking world.

Currently, this is the only fully functional multilingual Chinese social media service which helps to broaden its appeal to non-Chinese speakers as well as international companies. In fact, it is perhaps the most used app of an average Chinese phone today, which means that marketing via WeChat opens an attractive possibility of reaching your customers almost anywhere.

From functional and structural point of view, RenRen is very similar to Facebook and also uses open platform  allowing third parties to integrate with it by rendering modifications and adding functionalities. The APIs listed are quite similar with those Facebook provided, and some of RenRen’s developers are developing based on the SDK of Facebook.

RenRen is most popular among college and university students and back in 2011 claimed about 30 million active users. It seems that the appeal of RenRen is somewhat behind more mobile oriented services but it still likely to remain a major player in Chinese social media market landscape.