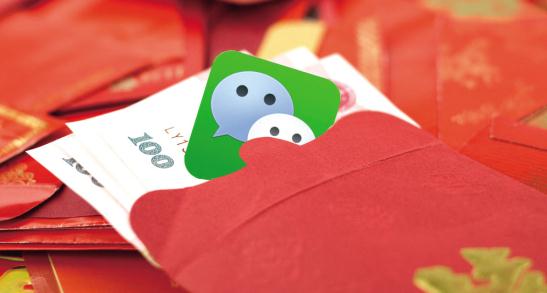 It is no surprise that with less than a week to go before Chinese Spring Festival, WeChat Lucky Money feature is quickly becoming the most used function among the users. It is truly amazing how thousands years old Chinese tradition of giving red envelops with money to friends and relatives during holidays has evolved in the digital age.

In fact, sending cash electronically with WeChat is becoming a tradition in its own right. Since exactly a year ago, when Tencent started to really promote this feature, WeChat Lucky Money transactions quickly achieved mind boggling numbers. According to the company, 60 million users are sending red envelops through WeChat everyday!

What makes WeChat Lucky Money feature so popular besides being the digital version of the popular tradition?

First of all, it is completely free – Tencent doesn’t charge any commissions or fees on Lucky Money transactions. 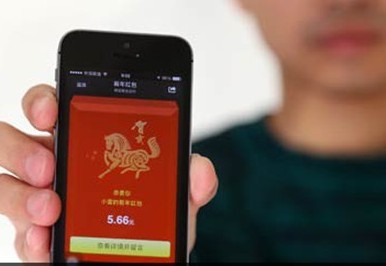 Second, WeChat had seized on a powerful social aspect of this activity – once a person gets a money over WeChat, he or she would typically return a favor and pass it forward to their friends. So, the phenomenon quickly snowballs, reaching a peak during the festival’s eve.

In fact, last year, during Spring Festival TV Gala, arguably the most viewed show on the planet, Tencent was giving some Lucky Money of its own. Users were supposed to use another popular shake feature to win some cash at certain times of the program. As a result, Tencent reportedly paid out 500 million RMB (~80 million USD) in winnings to lucky participants. During that event, Tencent reported having handled 880 million shakes per minute in 10 minutes peak, an unprecedented engineering feat. This event has skyrocketed WeChat Lucky Money feature with more people using it ever since.

Third, it is really simple to use. A user simply sets the amount and sends it to any of the contacts. Once the virtual red envelope is received and opened the cash is available immediately.

Users can also send a set amount to groups with WeChat randomizing the amount each group member gets. Since it is more likely that the first one who opens the “envelope” gets the largest amount, the lucky recipients would rush to open it as fast as possible (so called “stealing the lucky money”), adding to the excitement. This popular feature has added another gamification dimension to the whole thing. 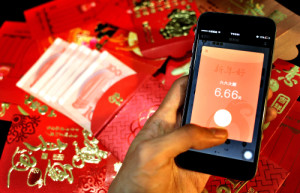 In fact, WeChat Lucky Money group function is also responsible for the fact that group chat, an already popular WeChat feature, became even more so. Moreover, it even created the unwanted side effect with groups getting set up solely around its gambling aspect. As gambling is illegal in China, Tencent has been trying to crack down on such groups by limiting some features and banning offending subscribers altogether.

Other companies, such as Alibaba, have been fiercely competing with Tencent, setting up their own lucky money features. However, what gives WeChat the advantage is that they were first to realize that giving cash, instead of coupons, will be the most popular way of using the feature. Besides, WeChat app is already installed on nearly 100% of Chinese smartphones. Combining that with the fact that  giving away red envelopes during holidays is practically a universal and most beloved tradition in China explains why WeChat Lucky Money is still going to be hard to compete against.

It is very likely that during this year’s Spring Festival, WeChat Lucky Money feature usage will set a new record once again. The next opportunity for sending out cash gifts will be on Valentine’s day on February 14th, one of the most popular Western holidays in China. Then there is a Chinese version of Valentine’s called Qixi Festival. coming up on August 9th. Before that one, there is another popular occasion on May 20th when it is also to send a small cash gift of RMB 5.20 between lovers. The number signifies that date and sounds like “I love you” in Chinese.

And then, there is mid-Autumn festival – another major traditional holiday in China. All that will, undoubtedly, keep WeChat even busier.